Hi everyone, today I have a cover reveal for a book that looks absolutely amazing. It’s an adult cozy mystery with a black main character, and the cover is breathtaking. You don’t have to take my word for it, just look for yourself and swoon with me. I personally have a huge soft spot for mystery books since I used to read those books way before I ever read YA books as a kid, so I know I’ll be getting my hands on this one. You should too! However, without further ado, I shall now show you the cover for Hollywood Homicide, 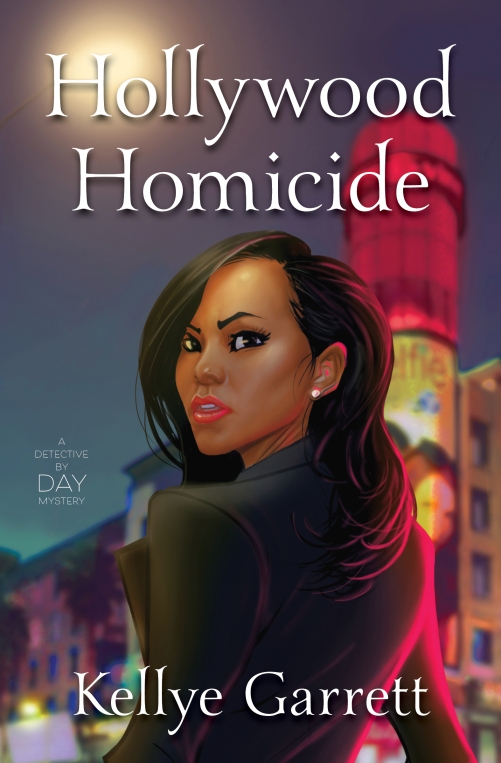 Book 1 in the Detective By Day Series

You can read the book blurb for Hollywood Homicide by Kellye Garrett here:

Dayna Anderson doesn’t set out to solve a murder. All the semi-famous, mega-broke black actress wants is to help her parents keep their house. After witnessing a deadly hit-and-run, she figures pursuing the fifteen-grand reward isn’t the craziest thing a Hollywood actress has done for some cash.

But what starts as simply trying to remember a speeding car soon blossoms into a full-on investigation. As Dayna digs deeper into the victim’s life, she wants more than just reward money. She’s determined to find the poor woman’s killer too. When she connects the accident to a notorious Hollywood crime spree, Dayna chases down leads at paparazzi hot spots, celeb homes and movie premieres. She loves every second—until someone tries to kill her.

And there are no second takes in real life.

Kellye Garrett spent 8 years working in Hollywood, including a stint writing for the CBS drama Cold Case. People were always surprised to learn what she did for a living—probably because she seemed way too happy to be brainstorming ways to murder people. A former magazine editor, Kellye holds a B.S. in magazine writing from Florida A&M and an MFA in screenwriting from USC’s famed film school. Having moved back to her native New Jersey, she spends her mornings commuting to Manhattan for her job at a leading media company—while still happily brainstorming ways to commit murder. Her first novel, Hollywood Homicide, will be released by Midnight Ink in August 2017. It’s the first book in the Detective by Day series.

You can pre-order the e-book and print edition on Amazon.

What do you guys think about the cover for Hollywood Homicide? Will you be pre-ordering it? I know I’m just dying to get my hands on it.